The ‘Go-To’ people for retirement

The purpose of the Kloof Retirement Villages Expo is to create an awareness around why we are the ‘go-to’ organisation in the Upper Highway area when it comes to retirement. While our Rotarian-linked provenance and 115 years of dedicated service is undisputed, many are unaware of the exceptional service that we offer seniors.

The main focus of Kloof Retirement Villages, which comprises of five estates and two care centres, is to provide a holistic service to seniors. Part of this service includes providing well-appointed and affordable retirement accommodation as well as assisted-living facilities and advanced care. An ethos of care is central to who we are and we strive to assist seniors on planning for their retirement effectively.

At Kloof Retirement Villages, our goal is to offer seniors assistance with decision making and choices in the exciting retirement phase.

We possess experienced and skilled staff dedicated to advising seniors on matters ranging from medical issues and health care, to end of life preparations; from appropriate retirement accommodation choices (not necessarily always our own facilities) to the pitfalls inherent in ‘getting it wrong’. Our staff provide confidential counselling and guidance in respect of dementia issues, as well as stimulating activities specifically designed to enhance seniors’ lives.

This then is the purpose of the Expo – to introduce you to our dedicated and effective team, and to provide you with essential information and advice regarding retirement planning. 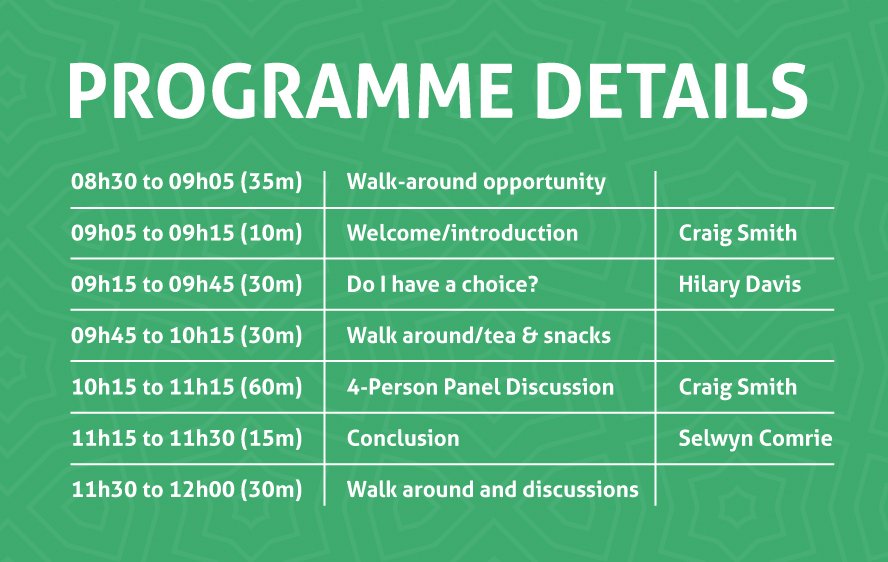 Craig Smith – the CEO of Kloof Retirement Villages is one of an increasingly rare breed – a leader who cares about residents and staff alike.

Hilary Davis – is a Grey’s Hospital trained Registered Nurse, who specialised in General, Community, Psychiatry and Midwifery – prior to qualifying in Nursing Management and Nursing Education. After working in a number of specialist areas, including Surgical, ICU, and Maternity wards, Hilary opened her own midwifery practice, which she managed successfully for seven years. She now manages the Kloof Retirement Villages care facilities.

Margaret McCullough – obtained her BA LLB at the University of Natal, Durban in 1989. She joined J Leslie Smith and Co. as an attorney in 1994, where she now serves as a Director. Margaret heads up the Fiduciary Department, and in that capacity, she deals with wills, trusts and the administration of deceased estates. She is a member of the Msunduzi Hospice Ethics Committee; the Emma Barter Victoria Home Committee; the Kloof Rest Home Committee and is also an elected councillor of the Legal Provincial Council for KZN.

Barry Smith – holds a Diploma in Advanced Executive Programme, and is a Certified Associate of the Institute of Bankers in SA. He was employed by Standard Bank for over 45 years, served on the Board of the Durban Chamber of Commerce, and was previously Chairman of the Institute of Bankers in South Africa (Durban Branch). Barry co-authored a book entitled “The Next Step” – a guide to planning the road through retirement.

Henry Spencer – has a Degree in Psychology, and a Masters Degree in Ethics. He has managed many organisations focused on senior care, both in South Africa and internationally. He has been a member of the KZN Alzheimers Society for over 25 years, a member of the British Society of Gerontology, and is the author of numerous books on retirement matters – a topic on which he also consults.

Selwyn Comrie – is Chairperson of Kloof Retirement Villages and is a past President of Kloof Rotary Club. Apart from his commitment to improving the well-being of retired people, he has a wealth of experience as an enterpreneur and supporter of local causes. Selwyn was a member of the Board of The Valley Trust, as well as an alternate director of Spar South Africa where he represented retailer interests.