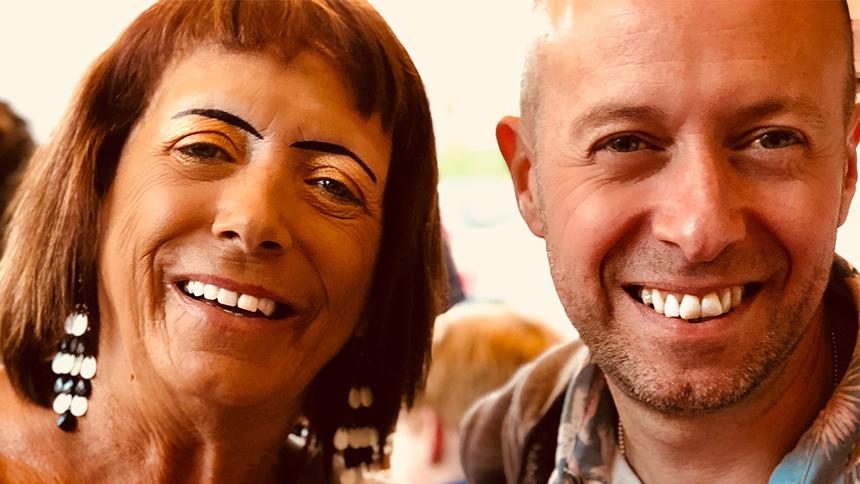 After a year’s separation from his mum, the return of face-to-face care home visits means the world to Jamie Greaves. ‘I was in full PPE and met by someone in a hazmat suit – it was like a science fiction film,’ says Jamie Greaves, recalling his first ‘window visit’ to his mum’s care home during the pandemic. ‘She recognised me but became hysterical and wanted to climb out, so had to be restrained by staff. It was actually quite horrendous.’ Like so many carers, friends and relatives, Jamie has found it incredibly upsetting to be denied proper visits to a loved one with dementia. ‘My mum is my world, she brings a great deal of joy to my life,’ he says. ‘I felt so guilty to suddenly stop visiting.’ With visits still restricted, Jamie continues to call for change. ‘I want it to go back to an open-door policy. Care home residents aren’t prisoners,’ he says.

Jamie is an only child… and the pair have always been close. ‘There wouldn’t be a day without some sort of contact,’ he says. Some years later, it started to become clear that something wasn’t right with her health. ‘She would repeat herself in emails, or phone me twice in three minutes, not realising we’d already spoken,’ says Jamie. ‘Her friends said she came back from a restaurant and got plates out to start cooking a meal.’ Patricia was ‘sectioned’ – detained under the Mental Health Act. She was diagnosed in December 2018 with frontotemporal dementia (FTD) and bipolar disorder.

Then came the pandemic, and Jamie was no longer allowed to be with his mum. ‘I was devastated,’ he says. ‘She couldn’t understand about the pandemic or that I wasn’t allowed to visit, so it was a horrendous time and very upsetting. I lost many nights’ sleep thinking about it, and as it went on the frustration built and built.’ Patricia found video calls confusing and window visits distressing, while pod visits were also unsuccessful. ‘She was behind a pane of glass but wouldn’t settle,’ says Jamie. ‘She was like a caged lion, trying to find a way out to be where I was.’ ‘I think that people’s deterioration during lockdown has been worse than the risk of COVID in some respects,’ he says. Jamie can now visit his mum once a week if he takes a COVID test beforehand and wears PPE. ‘It’s still not ideal, but it’s noticeably better,’ he says.

‘It seems odd to say, but after the year we’ve had, even being able to visit for 30 minutes meant the world. Seeing her face light up is worth a million dollars to me.

’Patricia found video calls confusing and window visits distressing, while pod visits were also unsuccessful. Although Jamie found the home’s manager to be understanding, in his opinion, care home companies have tended to be overly cautious. ‘I miss that freedom of longer visits. Mum gets quite sleepy now and sometimes struggles to talk, so when she’s animated and chatty I want to make the most of it,’ he says. And as Jamie reflects on a ‘horrendous’ year, the importance and value of his visits are as great as ever.

‘You’ve got to cherish moments with the people that you love, because you don’t know how dramatically things can change from one moment to the next.’