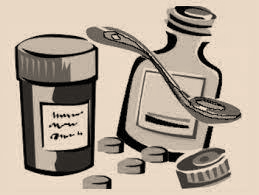 Control of medication in care centres

Recently in Nodding Hills Retirement Village, I was approached by a fellow resident who asked me the following question. He explained that a mutual friend of ours, who has sadly died, used to collect medications from a pharmacy in town, for a lady living in our Frail Care Unit. He then used to deliver it to her through the window of her room. (They were locked down due to COVID).  Bill related how he had now been requested by a relative to carry out this function for her. He sought my advice on the merits of agreeing to do this?

My advice was that irrespective of the nature of the medication, and whether or not it required a prescription, he should not involve himself; and that ALL medications whether over-the-counter, or prescription, should go through/be controlled by the Matron in charge of the Care centre.

Why would I say this? Firstly medications and even some supplements and vitamins can interact with each other in very dangerous ways. Such interactions, especially amongst the elderly, can increase the risk of falls, may result in delirium… and can even result in death.

Residents in care centres often have numerous routes through which they can source potentially conflicting medications. For example:

The dangers of uncontrolled dispensing of medications:

People sometimes mix substances together for multiple reasons. They might be taking several medicines, that their GP prescribed, but they may also use a larger or more frequent dose than the recommended dosage. Although less likely, in care centres, some might use an illegal drug, and then use other drugs after the first drug lowers their inhibitions. Or, they might simply want to experiment with different drugs to see what happens. But, regardless of the person’s reason for mixing several substances, the consequences of doing so can be life-threatening. Many people don’t realize that combining several substances together multiplies the dangers of substance abuse, but the fact is that abusing many drugs can cause serious and negative problems. And even vitamins and supplements can prove dangerous when combined with other substances and medications.

How many people die from mixing; or taking excessive medications?

The difficulty involved in trying to estimate the toll, however, hasn’t stopped Moore and other researchers from seeking to quantify how many people die annually from taking prescribed drugs – often by closely evaluating hospital admission studies. Estimates dating back nearly two decades put the number at 100,000 or more deaths annually, which includes a study published in the Journal of the American Medical Association in 1998 that projected 106,000 deaths. A more recent analysis estimates 128,000 Americans die each year as a result of taking medications as prescribed – or nearly five times the number of people killed by overdosing on prescription painkillers and heroin.

Due to the foregoing risks it is essential that all residents entering care centres are made aware that all medications, supplements and even vitamins that they are currently consuming, must on entry be declared, and that from then on, all future substances/medications must be administered via the Care Centre manager of Matron